Google told advertisers they would pay a fee on ads served in France or Spain. The move is in reaction of regulations taxing the revenue of big tech companies.


On March 2nd, Google sent an email to Google Ads users stipulating they would see a 2% fee on their invoices starting on May 1st, 2021. It applies to the ads that are served to French and Spanish IP addresses bought via Google Ads.

The company calls it a “Regulatory Operating Cost” and justifies it by the Digital Services Tax laws applied in France and Spain.

The taxes, also referred as the Google Tax in Spain and the GAFA tax in France, collect 3% of the turnovers made by large tech companies on French and Spanish users. It would charge revenue made by targeted digital advertising, advertising data sales, or by platforms solely acting as digital intermediaries in the sales of products or services. 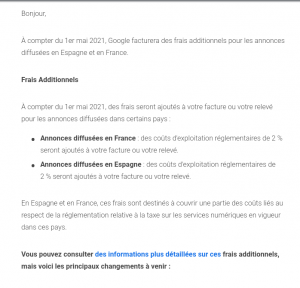 The legislation was passed in order to compensate the taxes that organizations such as Google, Apple, Facebook or Amazon avoid to pay. More traditional companies pay 14 percentage points more tax than the GAFAs in the EU.

The two countries adopted the laws in 2019 after the project of an international tax framework discussed by OECD members reached an impasse. The European Union had already discussed such a move but Sweden, Finland, Denmark and Ireland rejected the project.

As such, France decided to move forward with its own national regulation. The Spanish government followed shortly after. Germany backed down after concerns of retaliations against its automobile industry.

In 2019, French authorities estimated it could yield to €500 million of revenue a year.

Trade battle with the U.S.

Most of the organizations hit by the legislations are Americans. As a consequence, it sparked a trade battle with the U.S.

The U.S. administration decided on a 25% increase on custom taxes for $1.3bn-worth of products, such as handbags or cosmetics, punching some of the most vivid French exporters. Tariffs on wines and spirits were also mentioned but were eventually withdrawn. The U.S. had already increased EU tariffs with the Airbus-Boeing dispute. It also proved to hurtful to American wine and spirit retailers.

Due to the pandemic, both sides made a truce in early 2020 in order to find an agreement through the OECD.

In October 2020, the French Minister of Finance, Bruno Le Maire, declared such deal wasn’t found and that the state would collect the tax for the entire 2020.

On the U.S. side, the tariffs were due to come into force on January 6th, 2021. However, they announced the scheme was suspended indefinitely. The U.S. Trade Representative will instead evaluate a broader tariff framework.

The pause would in fact allow for further investigations on other Digital Tax Services applied in 10 more countries such as India, Italy, Britain or Italy.

Different fees applied according to the national regulations

Google and Amazon warned that such legislation would downstream affect their clients. The tech companies threatened to transfer the charge on the consumers.

Shortly after the French law was adopted, Amazon wanted to add the entirety of the tax at the customers’ expenses for any transaction made on Amazon.fr. Google announced in March 2021 that advertisers would pay for 2/3 of what the legislation collects for the use of their Google Ads service. It will be applied on all ads served in France and Spain, and can also be charged to advertisers transacting from other countries.

Similar fees have been enforced by Google in November in the UK, Turkey or Austria for their Digital Tax Legislation. The rates are 5% for Austria and Turkey, 2% for the UK.

Google Ads enables to buy some advertising formats that are seen on Google Search results, which accounts for 61% of the total Google revenue, Youtube or other websites, including news websites. Against a intermediary fee, most publishers who sell ads on their platforms make their inventory available on the industry-leading marketplace: Google AdX.

Since 2010, France had made several attempts in charging Google with taxes whereas their European HQ is based in Ireland with a more advantageous tax system.

Spain had also mandated Google to give publishers a part of their advertising revenue in 2014. The Californian company then decided to remove its Google News product from Spain.

Yet, in 2021, Google agreed to pay French and Australian publishers under copyright laws.

Google first threatened Australia to remove all its services from the country.

Microsoft stood up and said it was ready to offer an alternative. Microsoft sees an opportunity in government laws to reduce Google’s 91% market share on search engines. It would free up space for Bing, Microsoft’s own search engine.

Facebook first removed all news content from its platform in Australia for a few days before eventually agreeing to abide to the News Media and Digital Platforms Mandatory Bargaining Code. It will invest $1 billion in support of Australian news organizations for the next 3 years.