A tennis player and cryptocurrency enthusiast

“Sacha” Oliynykova, a Croatian tennis player in her professional debuts, decided to sell a part of her arm against Ethereum.

Six days after it was put on auction, the tennis player’s skin was sold for 3 ETH, or almost $5,415 USD at the time, to JumpHigh.

The owner can now leave the arm blank, put a permanent or temporary tattoo or even resell the area as a communication space during tournaments. A sports betting site wouldn’t be able to use it due to legal constraints.

The exact size of the area is 15×8 cm and covers a large part of her biceps, a zone of a tennis player highly visible.

This modest Croatian player obtained is currently 655th in the WTA singles ranking. Although she didn’t participate in a Grand Slam tournament yet, her innovative sell has however gained her attraction.

Where tennis superstars accumulate the majority of the prize money and marketing investment, visibility and media attraction is key to attract sponsors or sell image rights and finance a professional sports career.

With no sponsor yet, she has proved to be creative in trying to find money and be able to continue playing tennis.

She is going to promote a digital currency in the hope that its value will benefit her.

Oleksandra Oliynykova, a refugee who flew Ukraine at the age of 10, decided to become an ambassador of the Bitcoin Cash currency by wearing t-shirts and accessories with the Bitcoin Cash logo when she steps on a tennis court.

Even if she is not paid for doing so, the more a cryptocurrency is used, the more it is valued, which in turn benefits their owners. She didn’t say whether she owned any of the digital currency but a wallet specifically dedicated to her project can receive donations in Bitcoin Cash.

Athletes have always been creative in finding new opportunities, and Oliynykova to explore the area of digital currency. 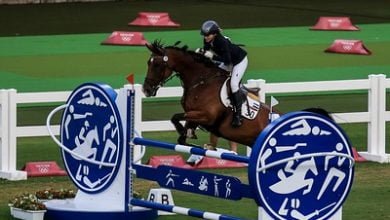