The story of Rayan moved millions of people who followed the unsuccessful rescue mission of the Moroccan child who fell in an abandoned well. The aftermath and surrounding stories were however much less reported.

During five days, the world has been following the attempts to rescue the five-year-old Moroccan Rayan. The boy fell and died in a narrow and abandoned 32-meter-deep well in the city of Chefchaouen in northern Morocco.

According to the Observatory of Digital Public Opinion (O2PN), 1.7 billion people saw a post or story related to Rayan online. But days following his death have been much less reported globally.

Rayan Oram’s funerals took place on Monday where hundreds of Moroccans gathered to pay tribute to the 5-year-old boy. The village cemetery could not fit all the mourners.

On the same day, a 7-old boy passed away after he fell in a well that the population still uses for its water supply in the Khemisset region. The well was 40 meters deep and rescuers couldn’t save the child.

The boy, who had Down syndrome, was playing near the well and fell into it, according to local media. He was reportedly disturbed by Rayan’s accident trying to reproduce the event. The boy allegedly drowned and an autopsy was going to be conducted to know the exact causes of the death.

A number of mothers in Morocco reported their children were affected by Rayan’s story.

Other than hatred comments, some saw in the widespread emotion sparked by Rayan’s story a malicious opportunity to take advantage of it.

On Tuesday, a statement from the Chefchaouen province warned that some posts on social media from Morocco and abroad were trying to take advantage of Rayan’s death. They were asking for charity donation of material or money. According to the province, Rayan’s family condemned any attempts to take advantage of their conditions.

Securing all the abandoned wells in Morocco and Saudi Arabia

After Rayan’s tragedy, the Ministry of Interior decided to fill all the abandoned wells in the country. Local authorities have been required to count and obstruct them as soon as possible. They would help citizens to secure dry wells by providing material necessary for the work.

“In order to avoid any repeat of the tragedy of Rayan, the water minister has instructed the directors of water resource offices to carry out a full survey of abandoned wells,” Water Ministry official Abdelaziz Zerouali told MAP news agency.

The exact number of abandoned wells in Morocco is difficult to know as a lot of them have been created without informing authorities. Many in rural Morocco struggle to have access to water for drinking and irrigation.

After the death of Rayan, Saudi Arabia also decided to clog and fortify 2,450 abandoned wells in the country, the Ministry of Environment, Water and Agriculture said on Sunday.

In December 2013, a 6-year-old girl named Lama fell into an artesian well while picnicking with her family near the northern city of Tabuk in Saudi Arabia. She was pulled out only weeks later.

After the accident, an app was developed by young Saudis to report unknown wells found by individuals or authorities. In 2012, a 30-year-old woman also fell and died in a well in Saudi Arabia.

Last Sunday, a Libyan boy would have died after his fall in a well near a Mosque in Benghazi as his father was looking for him according to his Facebook posts. 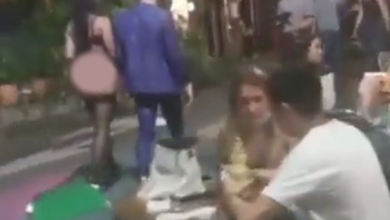